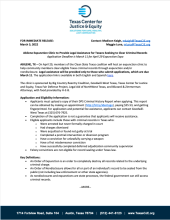 Plastic Surgery Has a Troubled History Inside Prisons. Some Advocates Want It to Make a Comeback.

Starting in 2017, Thai media published a series of articles on the country’s growing class of “new poor people,” former incarcerees who were finding it almost impossible to get hired and often returning to prison as a result.

Read the rest of this article from Mother Jones.

Clear Your Criminal History at Abilene's Expunction Clinic in April

Abilene attorneys Blizzard and Zimmerman are co-sponsoring the first "Reentry Coalition Expunction Clinic in Abilene." This event is Friday, April 29, 2022, from 9 am until 4 pm. There will be two sessions that day one is in the morning and the second in the afternoon.

Read the rest of this article from KEAN Radio.

Kids of color are disproportionately punished in the Harris County juvenile justice system, a study shows 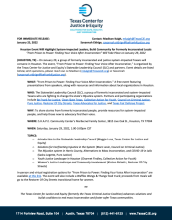 These middle-aged Texans committed crimes as young teenagers. Should they get a second chance?

Illinois women’s prison offers a new chance at a degree

Read the rest of this article from 19th News.

In Texas, people charged with crimes and found mentally incompetent to stand trial most often obtain restoration treatment at a state hospital before returning to jail and being able to actively participate in their defense. In recent years, there have been efforts to increase other competency restoration alternatives – like jail-based or outpatient methods – but for some people, those options are not always available.

Read the rest of this article from KXAN.

Over the past five years, more than 6,600 women in Texas prisons have made audio recordings of “The Invisible String,” a children’s book about the unseen bonds that connect us to those we cherish, no matter the distance. Each inmate’s recording and a copy of the brightly illustrated book were sent to her children, who often live hundreds of miles away with Grandma or another guardian.

Read the rest of this article from the Austin American-Statesman.