Imagining Solutions Beyond ALL Forms of Punishment: Size and Scope of Probation 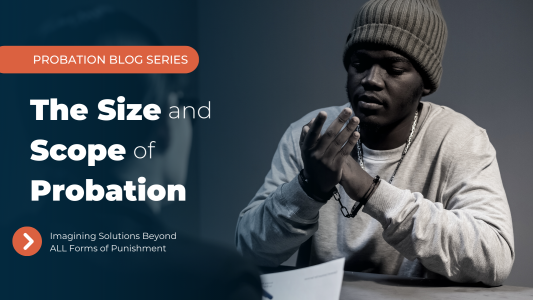 Today, close to 2 million human beings are locked away in more than 6,200 prisons, jails, and detention centers that span the American landscape. In fact, the U.S. has been consistently known as the world’s warden because of the sheer number of people our country locks up on any given day.

However, the reach of America’s ruthless criminal punishment system doesn’t stop at those people behind bars. Millions and millions of people, in various ways, find themselves ensnared and trapped (in some cases for life) by this massive system. The carceral logic used to cage people has spread, transforming and “deforming” the larger political, social, and economic landscape of this country. Think about those who lose their parental rights. Their voting rights. Access to public benefits. Access to education. Their ability to get an occupational license. The list goes on and on. As author and political scientist Marie Gottschalk notes in her book Caught: The Prison State and the Lockdown of American Politics, “...a tenacious carceral state has sprouted in the shadows of mass imprisonment and has been extending its reach far beyond the prison gate.”

One part of this extended reach can be seen in the very “alternatives” meant to keep people from being caged in the first place. One such “alternative” to incarceration that is often advocated by many and is usually a fan favorite across the political spectrum is probation. My hope is that this blog series will be a start to a different, more nuanced, and more open conversation where we not only challenge how we have traditionally viewed probation but push ourselves to imagine a world where something like probation doesn’t have to exist.

I know...that is a big statement.

But, as a way of easing us into that bigger conversation, let’s first explore the sheer size and scope of probation in our country, and how we compare to the rest of the world. 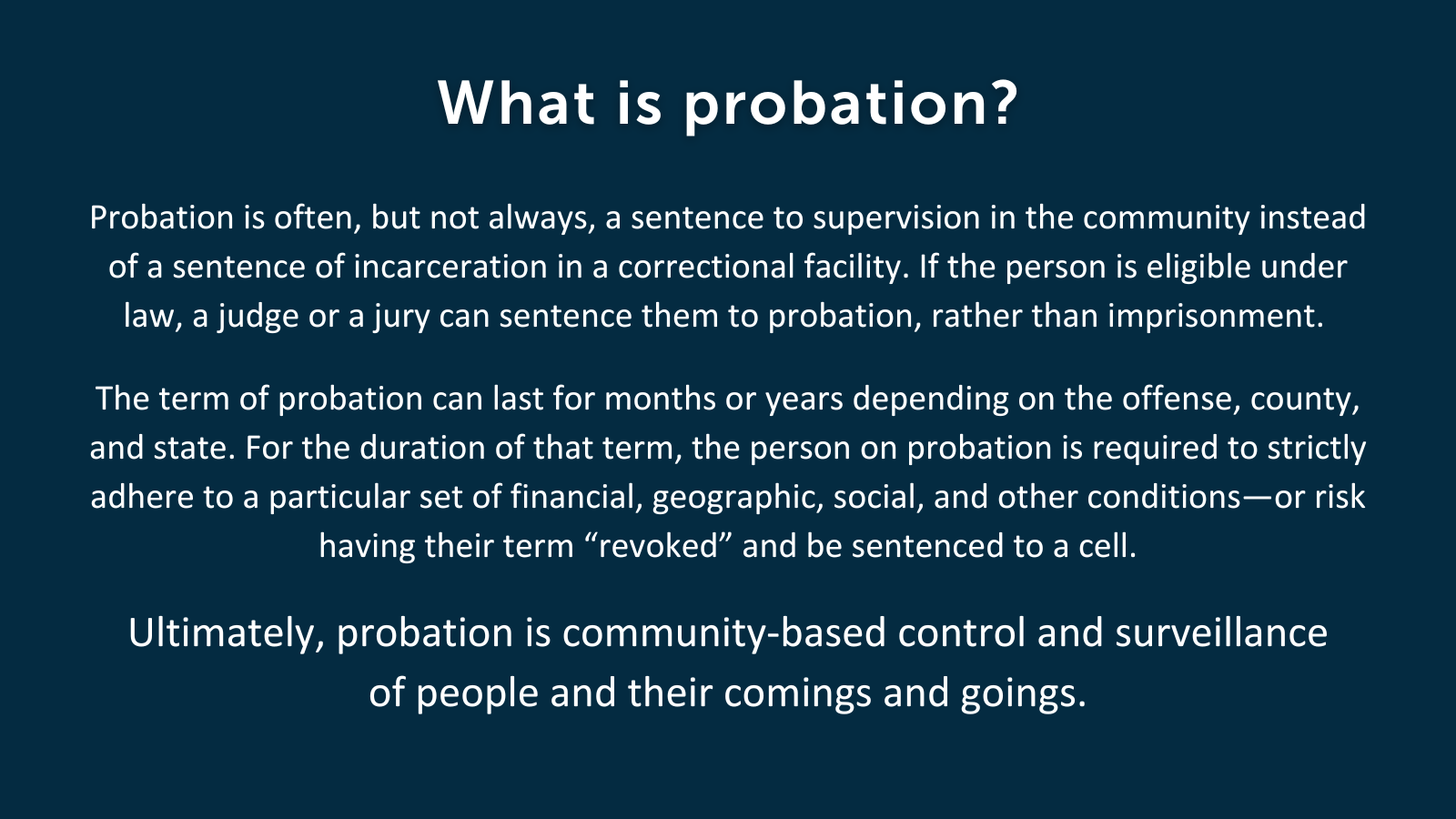 How many people in the U.S. are impacted?

While some know that the U.S. has consistently held the title of the world's No. 1 Incarcerator, it may be surprising for many to learn that we are also at the top of the list—leading the pack, actually—when it comes to the number of people on probation in our communities.

How do we know this? Well, let’s first look at how many people are on probation in this country. According to this 2021 report by the Bureau of Justice Statistics (BJS), whose website states that it is “the United States’ primary source for criminal justice statistics,” there were nearly 4 million people on probation or parole in the U.S. in 2020, with nearly 80%, or 3.1 million, on probation alone. In other words, 1 out of every 66 U.S. adults in 2020 was being supervised (either probation or parole), with 1 out of every 84 U.S. adults just on probation. 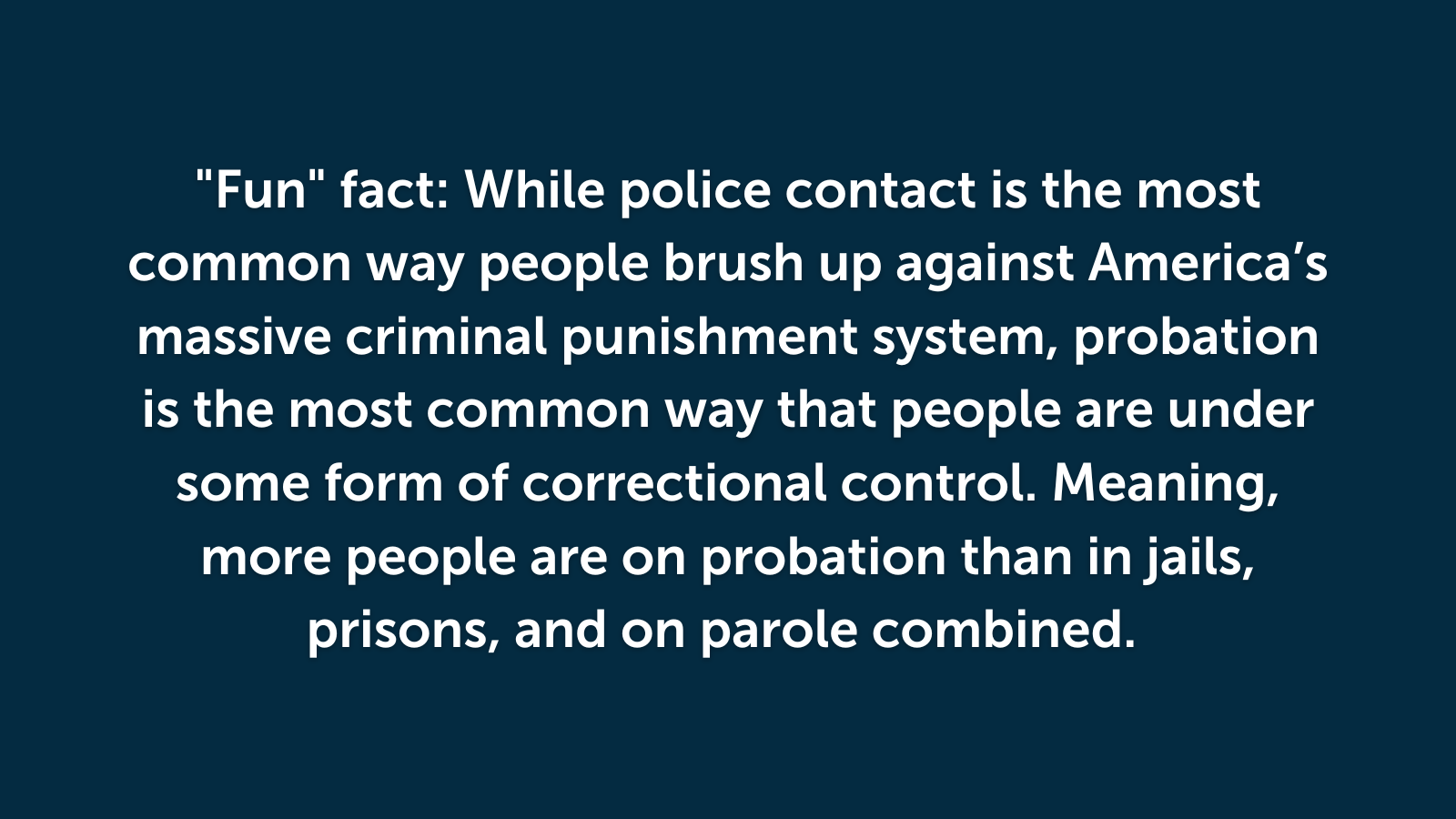 To help put those numbers in perspective, the number of people on probation in Texas in 2020 was larger than the entire city of Corpus Christi. In fact, if those 440,000+ individuals on probation AND parole decided to form their own city, it would be the 7th largest city in Texas—overtaking Arlington!

How does probation in the U.S. compare to other countries?

Clearly, many people (and their families) in this country are forced to navigate probation’s rough and dangerous terrain. But let’s see how we stack up against the rest of the world.

The chart below is from a 2020 research brief by the Columbia Justice Lab, which shows the probation and parole rate here in the U.S. versus in various European countries. 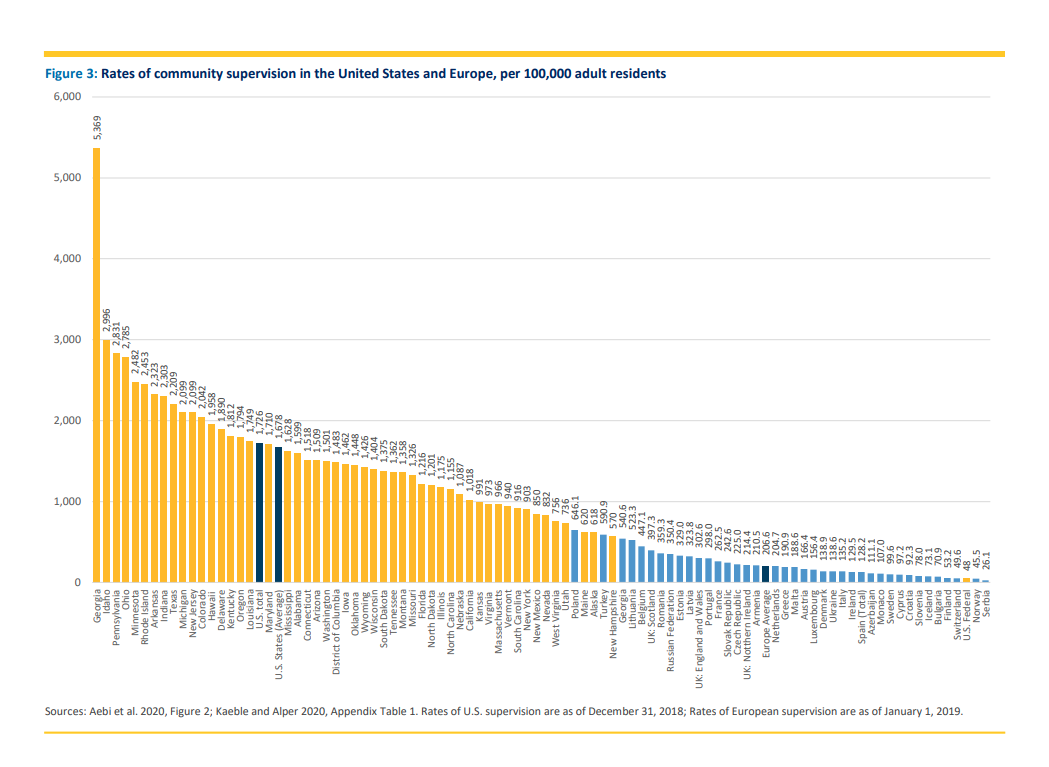 If you haven’t seen a chart like this before, it can be incredibly shocking to see just how much of an outlier the U.S. is, along with many U.S. states, when it comes to the rate at which people are on probation and parole.

And Texas? Well, not only was our own supervision rate far and above that of any European country shown above, but it was also much larger than 41 other U.S. states and the District of Columbia, as well as the U.S. total and U.S. average!

What does probation look like here in San Antonio?

What if we take this one step further, and look a little closer to home? Say, in my own backyard here in Bexar County, home of the best tacos along the I-35 corridor (sorry not sorry, Austin).

In Fiscal Year 2019, according to data we received from the Texas Department of Criminal Justice-Community Justice Assistance Division, the probation rate for Bexar County was somewhere around 1,217 per 100,000 adult residents. While the chart in the section above includes both probation AND parole supervision rates, it is still shocking to see that Texas’ fourth-largest county has a probation rate that, on its own, far exceeds the total supervision rates for all European countries and even some U.S. states!

How did U.S. probation rates get so high?

The Brennan Center put out some compelling information back in 2016 about probation rates: “As a nation, the United States outpaces the average probation rate among European countries by more than 400 percent despite similar crime rates.” In a more recent report by Human Rights Watch and the ACLU, the authors echoed these points, stating, “rates of supervision in the United States are five to ten times the rates of European nations, similar to incarceration rates.”

Great question! This, and many other questions you may have, are what we hope to elevate and answer in this series. As a start, though, check out the chart below.

This chart was taken from the same Columbia Justice Lab research brief mentioned above, which not only shows the growth rate of probation going back to 1980, but also the growth rates for our nation’s jails, prisons, and parole populations. 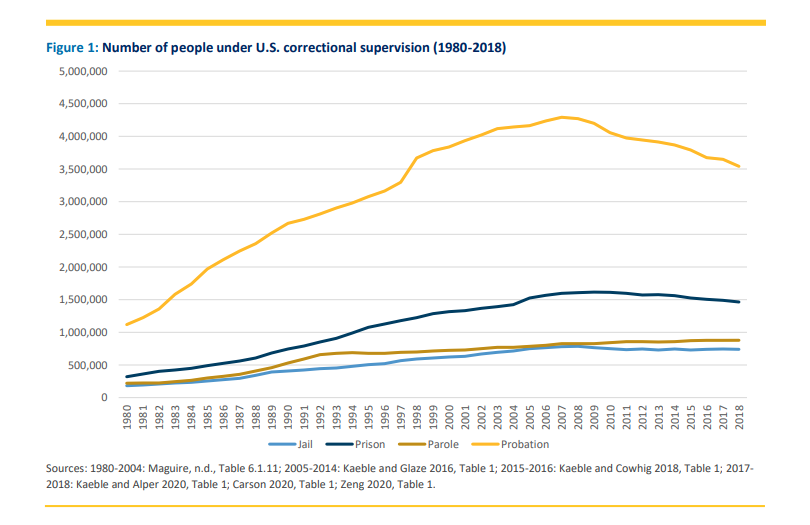 Researchers noted in the Columbia report that, “in terms of absolute numbers, there were 3.3 times as many people under supervision [probation and parole] in 2018 as there were in 1980.” And even when they accounted for overall population changes, the percent of adults under supervision was still more than twice as large in 2018 as in 1980.

Various other researchers and reports have also pointed to the extreme growth of probation and parole in the United States. And even though probation numbers have been declining consistently since 2007 (when probation hit its peak), the U.S. is still, both from an historical perspective AND when compared to other European countries, an extreme outlier when it comes to how many people are on probation and parole. More to come on the specific factors that played into probation’s growth in a later blog post.

A quick recap: Just as the U.S. leads the pack when it comes to the number of people we throw away and disappear inside various physical cages, so too is the U.S. a leader when it comes to creating “open-air prisons” via probation and parole.

In the next blog post in this series, we will explore probation’s humble origin story here in the U.S., as well as its messy and uncertain start in Texas. 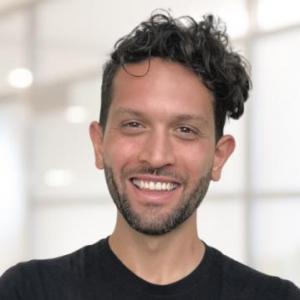 Justin is a Policy Analyst and the Bexar County Project Director at TCJE. Since joining the organization in early 2020, he has supported both youth- and adult-related justice reforms at the state level, while also working with local Bexar County partners to reform practices that lead to justice system involvement. Justin completed his Master of Arts in Legal Studies, with a Paralegal Certification, at Texas State University.